Introducing the Batman of Superyachts – The Wally 118

Sometimes there are things that just break the mould, things that people think are just not possible and things people dream of but are not brave enough to turn into reality. However there is a company that lives on the edge of imagination and makes it reality. Welcome to the world of Wally! 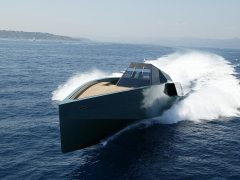 Although around for a few years now, the Wally 118 is nothing short of sensational, still able to turn heads amongest super yachts lined up in Monaco. Her design is futuristic and simplistic to the eye but underneath she oozes technological advances that are still not seen on some of today’s newly launched super yachts.

Luca Bassani’s Wally Yachts are not just an exercise in styling, it is in fact driven by some of the most demanding technical challenges ever taken on by a boatbuilder. 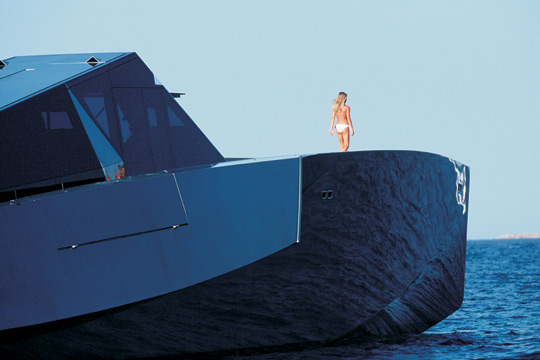 Genuinely new and high-tech, from her engine room to her folding radar mast, the Wallypower 118 has carbon, glass, and honeycomb construction, a superbly minimalist Euro interior by Lazzarini & Pickering, and a nearly 60-knot top speed. Scale models were tank tested at SSPA in Sweden and in Ferrari’s wind tunnel at Marinello, Italy. Intermarine, the renowned warship builder, built her. As a conscious re-evaluation of what express motoryachts should be like, she’s entitled to look a little out of the ordinary.

The 118 is an express motoryacht with berths for six guests in three en suite staterooms and six crew, and her accommodations are arranged symmetrically on each side of a straight, central corridor in that unique angular hull. The tender garage—in the bow—is revealed when a triangular section of the foredeck lifts, dead level, on three hydraulic rams. Just forward of the superstructure is an inset seating area, which can be shaded by a bimini top. That mysterious glass-sided deckhouse shelters a capacious saloon aft, with white upholstery, plain wood surfaces, and a seductive, beach-house ambience. The dining table sits amidships, just aft of the helm, made of carbon fiber. 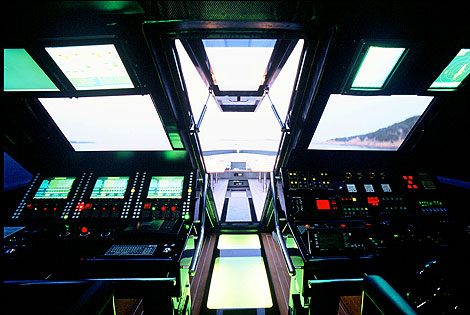 The 118 has a CODOG (combined diesel or gas) propulsion system—jet engines for speed, diesels for everything else—common on small warships, but rare on yachts this give her the ability to hit that magic 60knot mark with ease.

While gas turbines offer tremendous power-to-weight benefits (3.6 hp per pound in the TF50s), they do have a downside, as one British Harrier pilot discovered not long ago in 100-plus-degree conditions in the Persian Gulf, when his breathless aircraft landed in the sea beside the carrier. Although the Wallypower is unlikely to suffer such drastic consequences, jet-engine output typically declines by about 0.5 percent for every 1ºF increase in air temperature.

The Wallypower uses three DDC TF50s (maritime cousins of the Chinook helicopter engine) driving three KaMeWa waterjets. Their 5,600 hp is calibrated at a lab temperature of 59°F—a little different from an August afternoon in Florida. However hot it gets, though, the 118 should always be able to cruise at 40 knots without effort. Not many 100-footers can make that claim.

There is a more conventional engine option as well: twin 3,650-hp MTU 4000 V16 diesels, which Bassani claims will give the boat a 45-knot top speed and around a 40-knot cruise speed. Go for these, and you’ll also save about $8 million on the asking price (which is $16.55 million when the yacht is equipped with twin diesels, $24.83 million as tested above, with triple gas turbines).

It seems though that Wally only ever produced one fully operational 118, there is speculation that they produced another 2 hulls in preparation for orders for the yacht, however to date they don’t seem to have happened.

If you know of more than one Wally 118 out there please let us know.

18 Comments on “Introducing the Batman of Superyachts – The Wally 118”